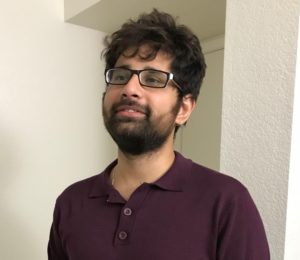 Twenty-seven-year-old Nakul Chawla, got his undergraduate degree in Information Sciences in Bangalore, India before coming to Arizona State University for graduate school. Nakul, having just defended his thesis, will be graduating this winter with a Masters in Computer Science from the Arizona State University Fulton School of Engineering. During his time in graduate school at ASU, Nakul was part of the Blockchain Research Lab where he worked with Principal Investigator Dr. Dragan Boscovic and other lab students. While studying at the lab, Nakul spent his time on two research projects, a research paper entitled “Block Propagation Applied to Nakamoto Networks” and his thesis entitled “Digital Fountains for Multi-Node Aggregation for Data in Blockchains.”

Nakul’s work with Nakamoto networks was spawned from the ASU Blockchain Research Lab partnering with the DASH network and working closing with Dash Core Group, it’s supporting entity. During this research, he worked with other lab members to simulate and evaluate different propagation techniques on public blockchains. Through their findings, they were able to determine the ideal method of block propagation and block size for the DASH network. If you’re interested in learning more about Nakul and the labs work with Dash you can read more here: https://blockchain.asu.edu/block-propagation-applied-to-nakamoto-networks/.

The second research project that Nakul was a part of during his time at Arizona State University was his thesis entitled “Digital Fountains for Multi-Node Aggregation for Data in Blockchains.” Early on in his research into blockchain technology, Nakul realized that most propagation techniques take data from only a single node. He saw this as inefficient and identified an opportunity to take data from multiple nodes in order to propagate blocks. Nakul imagined this method would operate similarly to how BitTorrent and other video streaming services work.

Over time Nakul figured out a way to send and receive data necessary for block recreation from multiple nodes while ensuring this data remained equal and encoded. To visualize this method, Nakul gives an example of a water fountain. As one would walk up to a water fountain to fill up a glass of water, they don’t mind where the water is coming from or how it is getting there, just as long as they get enough to fill the entire glass. Essentially this propagation method works the same way. All nodes that are connected send symbols to one another, it doesn’t matter what the symbols are or where they come from, as long as the receiver gets enough data to recreate the block on their side. As a proof of concept, Nakul was able to build and simulate this model using the DASH network. If you’re interested in learning more about Nakul’s thesis, you can find it here:

After we discussed the work Nakul was apart of during his time at ASU, I asked him some questions as an eager undergraduate student who wanted to learn how to be successful and make the most out of my time in university. As general advice, Nakul recommended to simply get in the habit of reading. He explained to me the importance of finding topics that interest me and learning as much as I could through reading the research and computer science papers that support it. Secondly, Nakul added that in order to really understand a concept sometimes you have to dive into the code. He explained to me that in order for him to really figure out how blockchains worked he was forced to simply go through Bitcoin’s source code. As an undergraduate student who has hopes of attending graduate school at some point, he stressed the importance of getting the fundamentals right. Nakul mentioned, “If you come into graduate school without knowing the fundamentals then things will be a lot harder because in graduate school you actually start to build on top of existing programs.” And as someone who is just entering graduate school, Nakul recommends them to focus more on what topics interest them, rather then what courses would be most impactful. He advises to “First find a field that interests you, then build your course schedule around that.”

Now, after graduation, Nakul is starting a full-time job with IBM as a Blockchain Engineer in January. And although Nakul is moving on and relocating to California, he told me that he will remember his time as a masters student at Arizona State University as “the best time of his life.”