Avery Carter: At the Cornerstone of Technology and Innovation 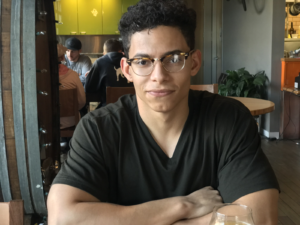 Avery Carter, a soon to be graduate of Arizona State University spent his time in academia at the cornerstone of innovation and the bleeding-edge of technology research. This article explores Avery’s involvement as an undergraduate student, his plans for the future, and the advice he’d give to students looking to keep a fast-paced technology focused mindset during their time in college.

Kickstarting his academic career in technology, Avery recieved a random update email from the Fulton School of Engineering about Eco-Car, an ASU initiative that partnered with General Motors to receive a 2016 Camaro. The Eco-Car team’s objective was to replace the existing engine with an electric one. Avery applied to an open position and was added to the team. Through this experience, Avery got to explore his passion for emerging tech and expand his knowledge in mechanical engineering. But it wasn’t until Avery left the Eco-Car team to join ASU’s Hyperloop team that he truly found his stride. Joining the Hyperloop team in late 2016, Avery described his team members as a “rag-tag group of engineers with a dream of meeting Elon Musk.” The Hyperloop team’s objective was creating a mock hyperloop transportation system for SpaceX. After just two weeks of Avery being on the Hyperloop team, he became the Levitation Subteam Lead, this position not only gave him great insight into engineering but also experience into managing a team of other engineers. Avery and the rest of the ASU Hyperloop team winded up placing high enough in the hyperloop competition that they had the opportunity to travel to Space X’s headquarters and meet Elon Musk.

During the summer of 2017, Avery began doing research into blockchain technology. Coming back to ASU during the Fall of 2017, he realized a severe lack of opportunity and resources for students that have a desire to explore this cutting-edge tech. Realizing theproblem at hand, Avery connected with other blockchain enthusiasts on campus and created ASU’s first blockchain organization, the Blockchain Innovation Society (BIS). Soon after launching, the organization quickly grew to over a hundred registered members, hosting speakers and giving lectures to professionals and blockchain enthusiasts throughout Arizona. Avery then helped launch the parent organization of BIS at ASU, a 501(c)(3) based out of Phoenix which charters the organization to other academic institutions around the world. If you’re interested you can learn more about the Blockchain Innovation Society here: https://blockchain.asu.edu/2018/01/blockchain-innovation-society/ .

Addition to his work with blockchain technology, Avery began diving into the programming world, specifically augment reality (AR) programming. Using the Apple AR Kit, Avery had his breakthrough one night when he was able to make a Zombie walk across his kitchen floor. A minor feat, but one large enough to spark his interest into the potential of AR technology in the long term. Now Avery workes with the ASU Research Enterprise to build an AR program that visualizes medical data. He is taking this project and competing in the ASUR VR Innovation Challange this April. If you’re interested in learning more about Avery’s AR project, a demo can be found on his LinkedIn: https://www.linkedin.com/feed/update/urn:li:activity:6424332135141908480 .

On top of all the work Avery had done with Eco-friendly driving, the ASU Hyperloop team, blockchain technology, and augmented reality, he also has contributed significantly to the ASU Blockchain Research Lab. Avery has contributed in the form of helping to edit proposals to organizations and clients, brainstorming research ideas that form project proposals and working on a whitepaper on smart city use on IoT, Blockchain, and machine to machine payments.

After graduating from Arizona State University this winter Avery hopes to continue working in the fast-paced tech environment that he became so accustomed to during his time in university. Although he plans on keeping an open mind to what the future may hold, he has set his sights set on working for Consensys one of the worlds top blockchain venture capital funds. At the end of our interview, I asked Avery for any advice he’d give first semester freshmen coming into college. He explained that when pursuing new technology it’s important not to be scared of the complicated stuff, instead work hard and read a lot to learn as much as you can on the subject. Although he realized that this may sound like a cliche Avery’s number one piece of advice, is the importance of pursuing what interests you, rather than where you can make the most money. He advised to “Follow what you’re passionate about especially when you’re young, and don’t be afraid to take risks that make you uncomfortable because it’s the only way you’re going to grow.”