Carbon Trading on a Blockchain

Abstract view of Carbon Trading on a Blockchain

The motivation to go green has not only increasingly become part of many company’s corporate social responsibilities, but also as an aspect of remaining relevant in the future business environment. Besides, there are more and more environmental concerns that can only be addressed through green initiatives in terms of production, servicing and manufacturing.

Companies are therefore seeking more innovative methods of promoting eco-friendly environments by integrating green practices in their business functions. Carbon offsetting is one such process that companies use to reduce their carbon emissions. A Carbon offset is a way to compensate for your emissions by funding an equivalent carbon dioxide saving elsewhere. Everyday actions of a company consume energy and produce carbon emissions, such as driving, flying and heating buildings. Carbon offsetting is used to balance out these emissions by helping to pay for emission savings in other parts of the world.

Stakeholders in the Carbon Trading Model 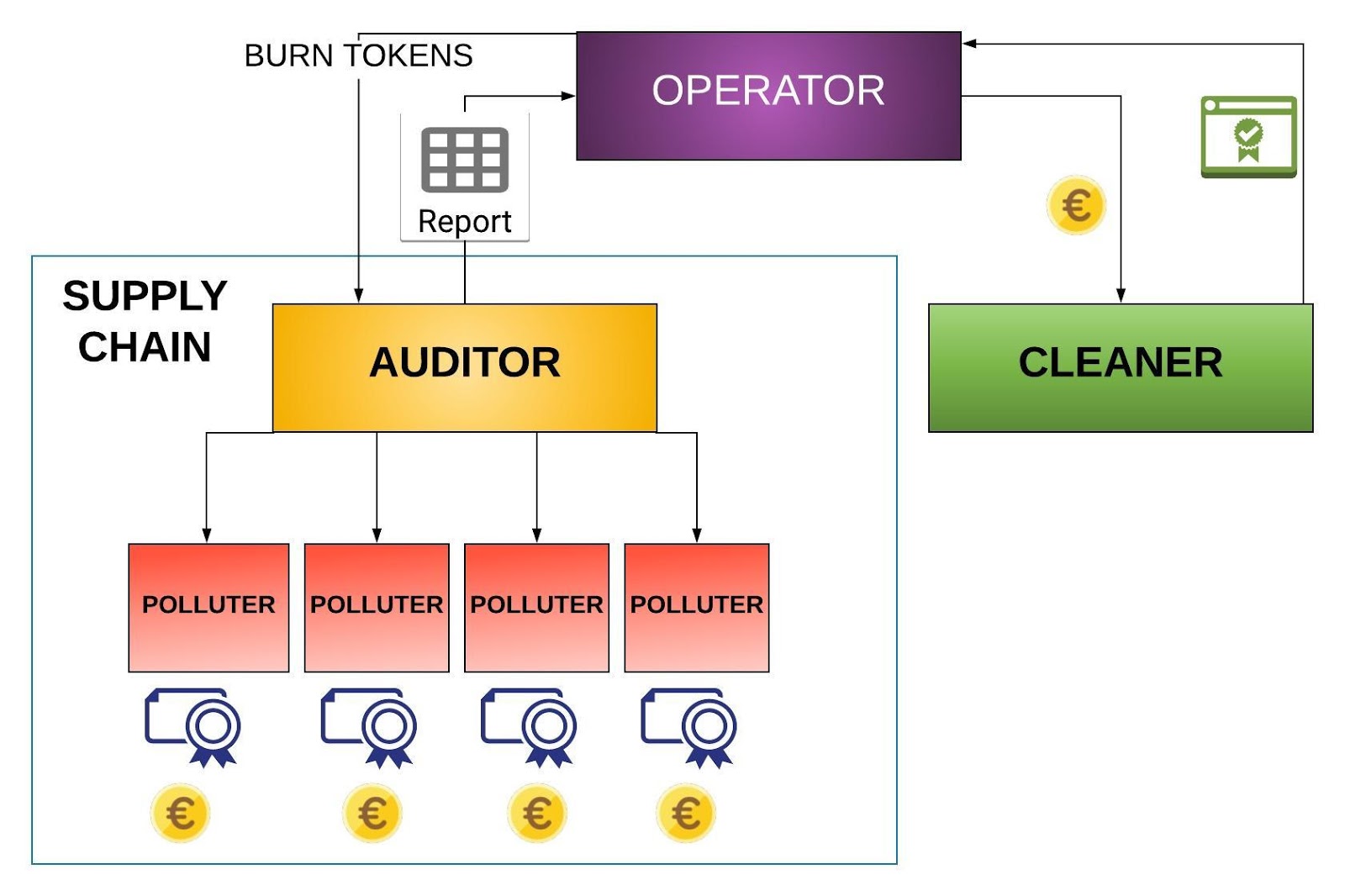 Let’s think of a scenario where a large multi-facet company (let’s call them Vehicle Inc.) wants to find an easier way to track and manage the amount of carbon their organization produces each year. And let’s say for simplicity’s sake, Vehicle Inc. has three very large factories. Factory A makes Airplanes, Factory B makes Boats and Factory C makes Cars. In this ecosystem, Vehicle Inc sets a quota for how many cubic tons (RT) of carbon each of their factories can produce each year:

Once these quotas are established, Vehicle Inc then sets an exchange rate between cubic tons of carbon and the tokens they are worth. Let’s say they decide that 1 token (1t) equals 10 Cubic Tons (10RT) of carbon. After that, they ask the operator (or network) to distribute tokens to each polluter (or factory) based on their set quota. As the year goes on and factories start producing carbon, the tokens that had been distributed to them are burned (or destroyed) as carbon is produced. This system allows Vehicle Inc. to keep track of how much carbon each of their factories produces each year.

Now let’s say one of their factories, Factory B went over their set quota and produced 300RT of carbon instead of 200RT. Vehicle Inc can now make a decision and look at their remaining two factories and see if they can pull tokens from the other parts of their supply chain to give to Factory B. For instance, suppose Factory C with a quota of 500RT only happened to produce 400RT that year, then Vehicle Inc can redistribute their tokens and give Factory C’s extra to Factory B. This reallocation of tokens would, in turn, satisfy Factory B’s needs and Vehicle Inc would meet expectations. It is to be noted that in further iterations of the model a surplus token issuance scheme will be implemented to combat any type of social loafing in this B2B system. This scheme will provide polluters with extra tokens based on how much they save, which in turn will incentivize them to stay under their pollution quota.

What if there are no extra tokens in Vehicle Inc’s supply chain? How do they satisfy Factory B’s overproduction of carbon? That’s when cleaners come in. In the carbon trading ecosystem, auditors like Vehicle Inc aren’t the only ones who receive tokens from the operator. Cleaners receive a set number of tokens based on the amount of carbon they reduce from the atmosphere. This allows cleaners to sell their tokens to auditors who have polluters that exceed their set quotas. This free market activity can also take place between two separate supply chain auditors, although this method is to be implemented in future iterations of the model. For instance, let’s assume Nike exceeded their carbon pollution quota, they could purchase some of Adidas tokens (assuming Adidas produced less carbon than their quota), and satisfy theirs over pollution. No matter the exchange rate of an individual companies tokens to a ton of carbon, any cleaner or auditor in the ecosystem could transact with one another. In this model, the free market decides how much a cubic ton of carbon costs. Furthermore it’s important to note that any corporate entity can be considered both a cleaner and a polluter. For example, Nike could gain tokens from the operator if they work towards reducing pollution in comparison to their own quota.

Validators in the Ecosystem

Now let’s talk about validators, these actors exist to verify exactly how much cubic tons of carbon are produced and cleaned by polluters and cleaners each year. These validations will be in the form of trusted third parties that are hired by auditors and cleaners to verify the amount of carbon they produce and reduce is accurate. An example of these third parties would be IoT devices that serve as a tertiary validator to ensure the validity of transactions being made and provide security for the entire carbon trading network. It should also be noted that self-reporting auditors and cleaners are unacceptable in this model, as this provides grounds for corruption. 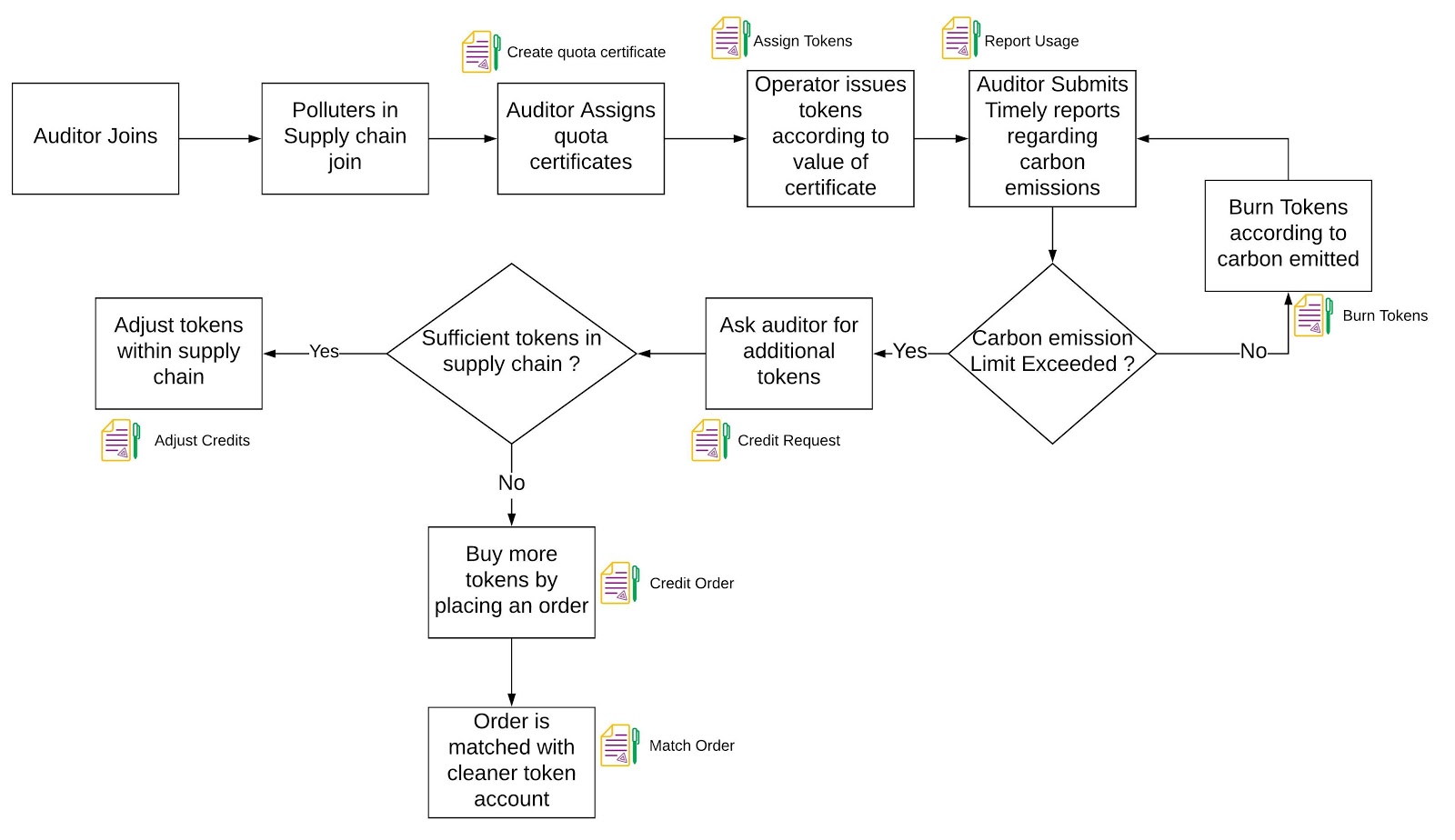 Carbon Trading at a Glance

Auditors asses their supply chain polluters and determine how many tokens they will need from the operator to satisfy their carbon produced. In turn, these tokens are burned as polluters produce carbon. Cleaners and auditors can sell and buy each other’s tokens to satisfy any demand, and validators can be hired or IoT devices used to verify that the amount of carbon being produced/reduced from the atmosphere is accurate. We believe that this five stakeholder model is ideal when creating a free market carbon trading ecosystem on a blockchain.

Here is a link to the Carbon Trading Demo Playlist