A Verifiable Distributed Voting System without a Trusted Party

Elections enable individuals to express their thoughts and opinions without compromising privacy. Maintaining voter confidentiality is an essential component of elections – no one party should be able to link the vote to the voter. However, typical voting systems today have limitations, in particular the need for trusting a third party with voter privacy. While certain decentralized voting systems have attempted to solve this problem, none can handle attacks from within the network. This paper provides a practical solution: a voting system that can “operate independently of any trusted party by distributing the vote administration to a number of voting authorities.” 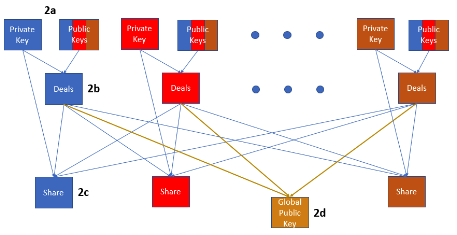 Real-world implementation was achieved with the production of several functions: one creating a public-private keypair for each voting authority, one publishing the global public key, one dealing private key shares to each authority, one decrypting votes using these shares, and one shuffling and verifying the votes.

Bouck executed several runtime tests to demonstrate the feasibility of this system, altering the number of voters, ballots and threshold of voters required for decryption. Because the voting scheme setup (the “initialization” and “communication” phases) took longer than the other stages, runtime here was averaged over ten trials. For all other election phases, the runtime was averaged over fifty trials.

This system is completely distributed while accomplishing secure, private voting: dozens of authorities could run elections for thousands of voters without a trusted central jurisdiction. Such a scheme could vastly improve our democratic institutions; there is no third party or central authority able to control or alter electoral results. In politically unstable countries with corrupt democracies, this system could provide strong verification and legitimacy for elections. It also opens the door for any person, organization or institution to run a secure, decentralized election, simultaneously increasing democracy’s accessibility while decreasing cost.

A weakness of this system is that it assumes a majority of users will not collude or deviate from the scheme. Nevertheless, as long as there is a majority of legitimate operators, the election will remain secure. Voters can also modify their votes until the result is revealed. While this might not seem ideal, it does prevent a premature reveal of votes which could influence election results. Lastly, shuffles could be more efficiently designated to certain voting authorities instead of the entire set, ultimately reducing computation time.

Link to the original paper by Spencer J. Bouck